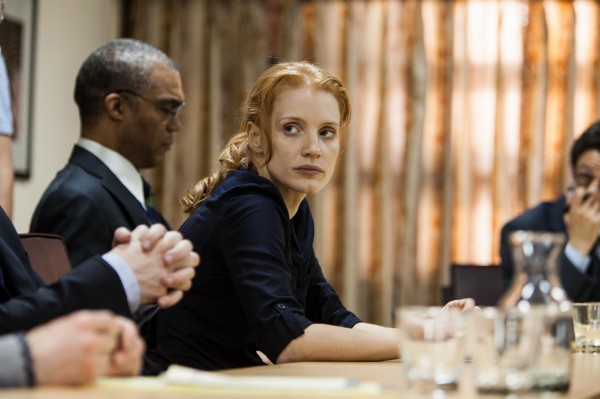 “This is movie journalism that snaps and stings, that purifies a decade’s clamor and clutter into narrative clarity, with a salutary kick. […]

This is in no way a political film; it carries neither a torch for Barack Obama (who is seen only for seconds, promising in a 2008 news clip to end waterboarding) nor the agitated imprint of an Oliver Stone film. Essentially, it’s a police procedural on the grand scale.

First and last, Zero Dark Thirty is a movie, and a damned fine one. Like Argo — which, with all due respect to director Ben Affleck and the film’s many admirers, ZDT blows out of the water — it dramatizes a true-life international adventure with CIA agents as the heroes. (And it takes fewer fictional liberties with the source material than Affleck did.) In the tradition of Truman Capote’s In Cold Blood and Tom Wolfe’s The Right Stuff, Boal tracked down the particulars of a sensational exploit and, skipping the “non-fiction novel” stage, created an original screenplay that provides a streamlined timeline of the hunt for bin Laden.

In The Hurt Locker, which won Oscars for Best Director and Original Screenplay, Bigelow and Boal viewed the war on terror in microcosm, through the eyes of a trio of bomb defusers in Iraq. ZDT is the macrocosm. Instead of a Baghdad street where an IED could explode underfoot, Maya and her colleagues tread a minefield that stretches from Kabul to Times Square. Though focusing on the determination and resilience of Maya (based on a real CIA tracker), the film is a giant fresco, an imposing series of surgical strikes set in Pakistan, Afghanistan, Saudi Arabia, Kuwait, Poland and the U.S. For a throbbing 2hr.40min., ZDT moves through enemy territory with the speed, weight, brains and grace of an all-star NFL linebacker; it’s the Lawrence Taylor of war-ops movies.

As a bright young woman driven to bring down an al Qaeda terrorist, Maya shares aspects of Claire Danes’s Carrie Mathison in the Showtime series Homeland, but she lacks Carrie’s defining neuroses — or much other personal biography. What are Maya’s political beliefs? Who are her family and friends back home? Does she have a sex life? Doesn’t matter: she is her job. In a way, Maya is the CIA equivalent of Bigelow: a strong woman who has mastered a man’s game.

At the end, the woman who found Osama also finds an end to her sacred obsession. And, eight years to the day after George W. Bush prematurely announced it, an American official has earned the right to proclaim, “Mission accomplished.” So too, with this splendid sortie into cinematic reportage, can Kathryn Bigelow. 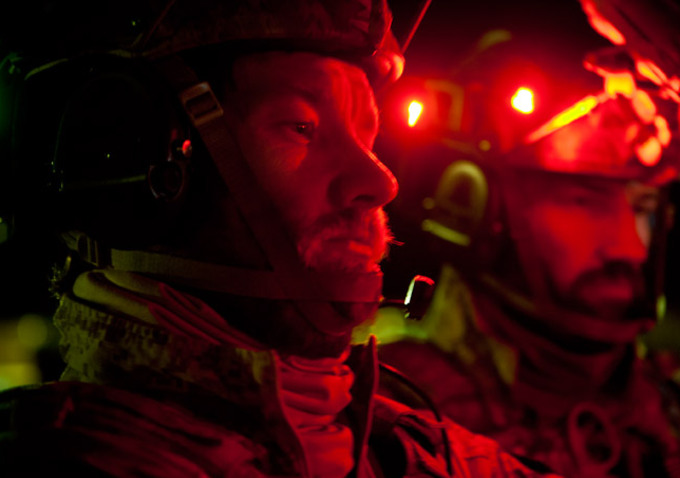 Whether you call it well informed speculative history, docu-drama recreation or very stripped down suspense filmmaking, Zero Dark Thirty matches form and content to pretty terrific ends. A long-arc account of the search for Osama Bin Laden seen from the perspective of an almost insanely focused female CIA officer who never gives up the hunt until the prey ends up in a body bag, Kathryn Bigelow‘s and Mark Boal‘s heavily researched successor to The Hurt Locker will be tough for some viewers to take, not only for its early scenes of torture, including water boarding, but due to its denial of conventional emotionalism and non-gung ho approach to cathartic revenge-taking. Films touching on 9/11, such as United 93, World Trade Center, and Extremely Loud & Incredibly Close, have proven commercially toxic, and while this one has a “happy” ending, its rigorous, unsparing approach will inspire genuine enthusiasm among the serious, hardcore film crowd more than with the wider public.

Even though it runs more than two-and-a-half hours, Zero Dark Thirty is so pared to essentials that even politics are eliminated; there’s essentially no Bush or Cheney, no Iraq War, no Obama announcing the success of the May 2, 2011 raid on Bin Laden’s in-plain-sight Pakistani compound. Similarly absent is any personal life for the single-minded heroine; when it’s suggested at one point that she might want to have a fling, she colorfully replies that she’s not a girl who does that sort of thing.

[…]  Connecting the dots, however, is the dogged presence of Maya (Jessica Chastain), a young, flame-haired CIA officer who barely flinches when she first witnesses torture, is described as “a killer” by a colleague and, after a close call, allows that, “I believe I was spared so I could finish the job.” Boal, who dug as deeply into the classified aspects of the case as possible but seems to have been more committed to protecting the identities of those involved than even some participants have been, has said that there really is a “Maya,” although details have been fudged and altered to prevent identification.
McCarthy descrive Zero Dark Thirty, come il miglior film della Bigelow ed elogia l’interpretazione della Chastain:As it has emerged instead, it could well be the most impressive film Bigelow has made, as well as possibly her most personal, as one keenly feels the drive of the filmmaker channeled through the intensity of Maya’s character. The film’s power steadily and relentlessly builds over its long course, to a point that is terrifically imposing and unshakable.Chastain carries the film in a way she’s never been asked to do before. Denied the opportunity to provide psychological and emotional details for Maya, she nonetheless creates a character that proves indelible and deeply felt. The entire cast works in a realistic vein to fine effect.

Anche Peter Debruge su Variety è entusiasta del film della Bigelow:Running a dense two hours thirty, before credits, “Zero Dark Thirty” reunites director Kathryn Bigelow with reporter-turned-scenarist Mark Boal in re-creating the hunt for Osama bin Laden, rejecting nearly every cliche one might expect from a Hollywood treatment of the subject. Far more ambitious than “The Hurt Locker,” yet nowhere near so tripwire-tense, this procedure-driven, decade-spanning docudrama nevertheless rivets for most of its running time by focusing on how one female CIA agent with a far-out hunch was instrumental in bringing down America’s most wanted fugitive. Spinning the pic as a thriller, Sony could beat the 9/11-movie curse when the Dec. 19 limited release goes wide in January.

[…] By forcing partisan politics into the wings (President George W. Bush goes entirely unseen, while auds’ only glimpse of President Obama is during a 2008 campaign interview), the filmmakers effectively give gender politics the whole stage: The pic presents the highest-profile U.S. military success in recent memory as the work of a single woman, “Maya” (Jessica Chastain), inspired by a real CIA analyst Boal discovered during his research, and presented here as the only government official convinced that bin Laden wasn’t “hiding in some cave” (Bush’s words), but somewhere she could find him.

Stepping up from a year busy with supporting roles, Chastain may at first seem an unusual choice for the lead. But she shows she has the chops to embody the pic’s iron-nerved protag, holding her own in the testosterone-thick world of CIA black sites and top-level Washington boardrooms. 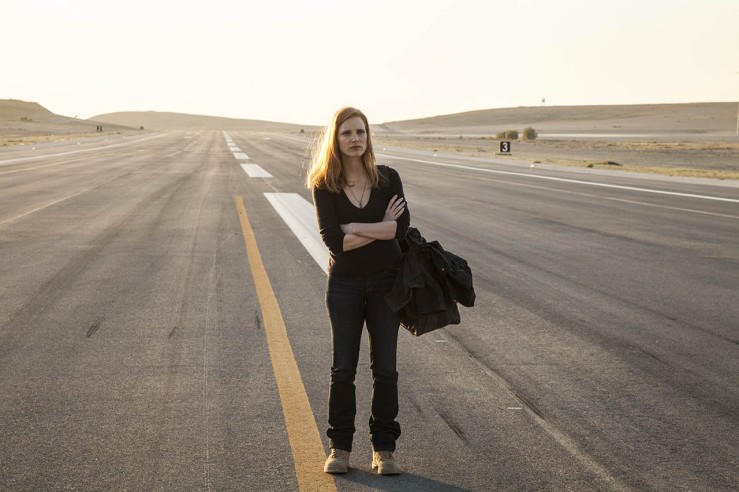 Kathryn Bigelow’s kill–bin Laden epic Zero Dark Thirty is the most neutral-seeming “America, Fuck Yeah!” picture ever made. In its narrative arc, it is barely distinct from a boneheaded right-wing revenge picture, but the vibe is cool, brisk, grown-up, packed with impressively real-sounding intel jargon. And the hero is no gun-toting macho man. She’s a CIA agent named Maya (Jessica Chastain), a woman in a world in which men call the shots, metaphorically and literally. Presented with the movie’s liberal-pleasing feminist overlay, you root for her to compel the men to do what men would do naturally if they weren’t so constrained by modern technological and bureaucratic and constitutional hurdles: find the motherfucker and blow his fucking head off. As a moral statement, Zero Dark Thirty is borderline fascistic. As a piece of cinema, it’s phenomenally gripping—an unholy masterwork.

[…] The best theory I’ve heard for the movie’s vantage is that Boal fell in love with his CIA sources and embraced their perspective wholeheartedly. Admittedly, that’s one reason the film is so effective—much like 24, with its army of ACLU types poised to swoop down on agents trying to save us from all those ticking time bombs. I’m more sympathetic to Alex Gibney’s view in his Oscar-winning Taxi to the Dark Side, in which former FBI agent Jack Cloonan cites evidence that sensory deprivation, waterboarding, etc. make people psychotic in less than 72 hours and elicit bogus confessions. At a Q&A last week, Bigelow and Boal shrugged off the movie’s politics. They’re just reporters reporting what happened, they said. And after all, we got the motherfucker who took down the Trade Center. Maya is the pretty little lady whose certainty compelled American men to overcome their wishy-washy caution. Zero Dark Thirty gives the dark side a woman’s blessing; a woman director has made the best damn unsavory thriller in years.